Following a difficult path to legalization, Florida’s medical marijuana industry is confronted with a new obstacle: a bipartisan bill seeking further regulation of the industry.

In Florida’s 2022 legislative session, Democratic and Republican lawmakers hope to pass a bill that would make it more difficult to buy and sell medical-marijuana-related products, specifically Delta-8 tetrahydrocannabinol (THC).

Delta-9 THC is the most potent compound found in marijuana extracted from the hemp plant. The hemp plant also yields the Delta-8 compound, a legal and milder form of THC, which produces a similar euphoric effect to Delta-9.

Because Delta-8 has not been evaluated by the Food and Drug Administration, the compound is legal and considered to be a loophole for marijuana users.

The insubstantial research and regulation on Delta-8, however, makes it especially dangerous for consumers.

HB 679 hopes to close this loophole by increasing regulations on Delta-8 and limiting the scope of products protected within the medical marijuana industry.

The bill is sponsored by Reps. Spencer Roach, R-North Fort Myers, and Andrew Learned, D-Brandon, who hope to seek bipartisan agreement. Learned told the Florida Political Review the bill “represents the best of bipartisan compromise in your Florida House.”

HB 679 would establish a variety of guidelines to protect consumers and diminish exploitation by sellers, including:

Florida Commissioner of Agriculture and Consumer Services Nikki Fried, a vocal advocate of medical marijuana, said the bill would help “monitor the introduction of new products from a fast moving industry.” Fried also told the Florida Political Review that protecting consumers is one of her top priorities as Florida’s commissioner of agriculture.

According to the FDA, Delta-8 products may be labeled as hemp products and mislead consumers who associate hemp with non-psychoactive products. Furthermore, there is concern from the FDA about products that are labeled “for therapeutic or medical use” despite not being approved for such uses.

In 2021, there were 661 calls to poison control centers regarding Delta-8 — 100 of which resulted in hospitalizations. 39% of the cases involved pediatric patients under the age of 18. Delta-8 cannot directly cause death; however, the low regulation of the industry makes it possible for products to be contaminated during manufacturing.

The bill would attempt to limit false advertising practices for Delta-8 products. Additionally, it would restrict digital advertising to children.

The legality of marijuana use has proven to be a primary issue in the U.S. for the past decade. Medically, it is legal in 37 out of the 50 states. Recreationally, it is fully legal in 19 states. Otherwise, it is illegal to possess any form of marijuana without proper medical documentation. Recent trends have suggested a substantial increase in the use of marijuana in the U.S.

State-level governments have begun to crack down on the Delta-8 compound, with 18 states either banning or restricting it. The majority of restrictions have surfaced following a 2018 farm bill legalizing hemp in the U.S. Some prominent states with Delta-8 bans include New York, Arizona and Michigan.

The proposed bill would be the first major step for regulation of the medical marijuana industry since it was legalized in Florida five years ago. A similar bill to Roach and Learned’s has appeared before the Florida Legislature last session, but it failed to make its way into law.

Although these prior efforts have failed to amend medical marijauna laws in Florida, both sponsors of HB 679 are confident in the potential for a bipartisan effort to create a safer medical marijuana industry in Florida. 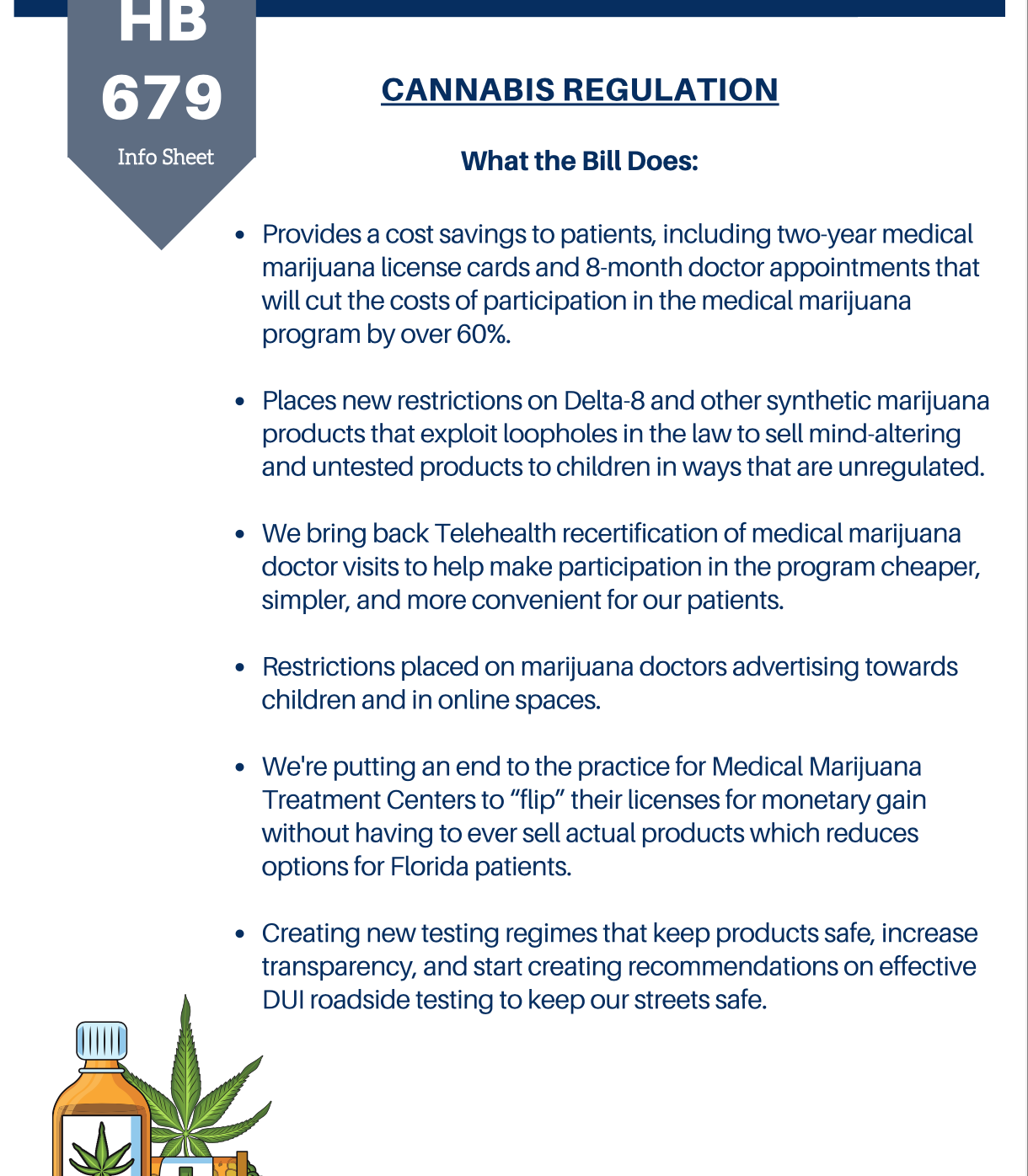 Featured Image: Marijuana in a growing facility. Unmodified photo by greenserenityca under use of a Creative Commons license. https://bit.ly/3qsQ19X

This site uses Akismet to reduce spam. Learn how your comment data is processed.